By June most of the Muskies spawning on the lake should be finished. This is very important as the lake is sustained strictly by natural reproduction. Muskies spawn when water temps are around 51 degrees. Which most years is in early to mid May depending on where you are on the lake and definitely dictated by the weather. Of course the lake is very dynamic with regards to water temps. Lake Huron is deep, cold, and clear and drives the water into Lake. St. Clair. Lake St. Clair is relatively shallow and has many bays that will warm up earlier than other areas. Then you have surface temps and current areas!!!! Confusing!!!! Either way we at Whopper Stopper don’t target Muskies until June when hopefully most of the fish have gone through their spawning process. April and May are phenomenal months to beat on the walleyes then we get to the fun stuff!!!

Well!!!!! Anytime you can get here of course!!! You can't catch muskies sitting on the couch!!!! What’s going to happen is: the Muskies will come off the spawn in May. As the water warms up so does their metabolism. They are a warm water fish ( unlike northern pike, walleyes, perch, trout, salmon, etc.) and  prefer temps in the 70’s. Which most of Lake St. Clair’s surface temps will be by the third week of June until approximately late September. During this time, they will set up a summer home range and will cruise and feed out in largely the main basin of the lake.  This is the best period for action and a good chance at long fish.

Sometime around late September and early October the water temps drop and the bait and muskies scatter vacating that summer home range. With the water temp dropping so does the muskies metabolism (meaning they aren’t needing to feed as often). This can be a more inconsistent time until the water temp on Lk. St. Clair gets into the 40s. BUT – I have some secret spots to still be successful most days. There are giant muskies to be had and they are getting plump!!!!

My favorite time of the year is when the water temps get into the 40s, generally late October or early November. Most of the bait has collapsed in tight towards shore and the muskies are close behind. The muskies mean business this time of year, and are generally much heavier than the summer time fish. They are feeding to sustain themselves through the winter and develop eggs or sperm for the spawn.  They are feeding but not metabolizing the food quickly. (AKA. GETTING FAT!!)

Sounds like heaven!!! Giant fish in tight!!!! Well of course there can be an issue….. Mother Nature. Cold fronts and windy conditions predominate during this time of the year. It's highly recommended if possible to book a couple days.

No matter what date you book ….be assured we have been successful from the start of the season through the end. We will have a great time, put you on fish with the best techniques and baits! So hopefully you catch a fish of your lifetime!!! 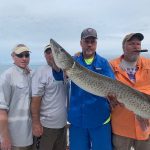 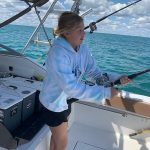 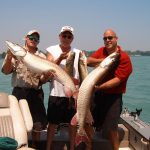 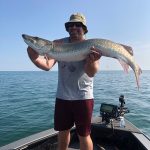 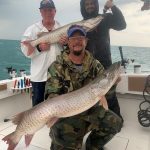 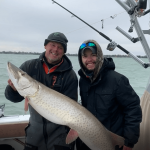 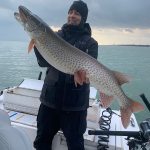 What To Bring on My Charter

Find out what we recommend you bring for your Muskie charter!! Click here!!

Call to book a trip!